I haven't been posting much recently partly because I just seem to be too busy but also because I've had a niggling problem with my right Achilles tendon. This has been going on for a couple of months and seems to be a tendinitis (there is a noticable lump on the tendon!). I have finally admitted that it does seem to get better with rest and that going for a long cycle just aggravates it.

The weekend past however would not normally include any cycling as it was time again for the annual Anstruther Muster. I had everything ready to sail on the ebbing tide at 07:00 on Saturday. Unfortunately the wind had other ideas and, as forecast, it was soon blowing over 30mph. That's far too much for my wee boat. If I was caught out in it I know the boat would be safe, if a bit uncomfortable, but to deliberately set out into that sort of wind is foolhardy. 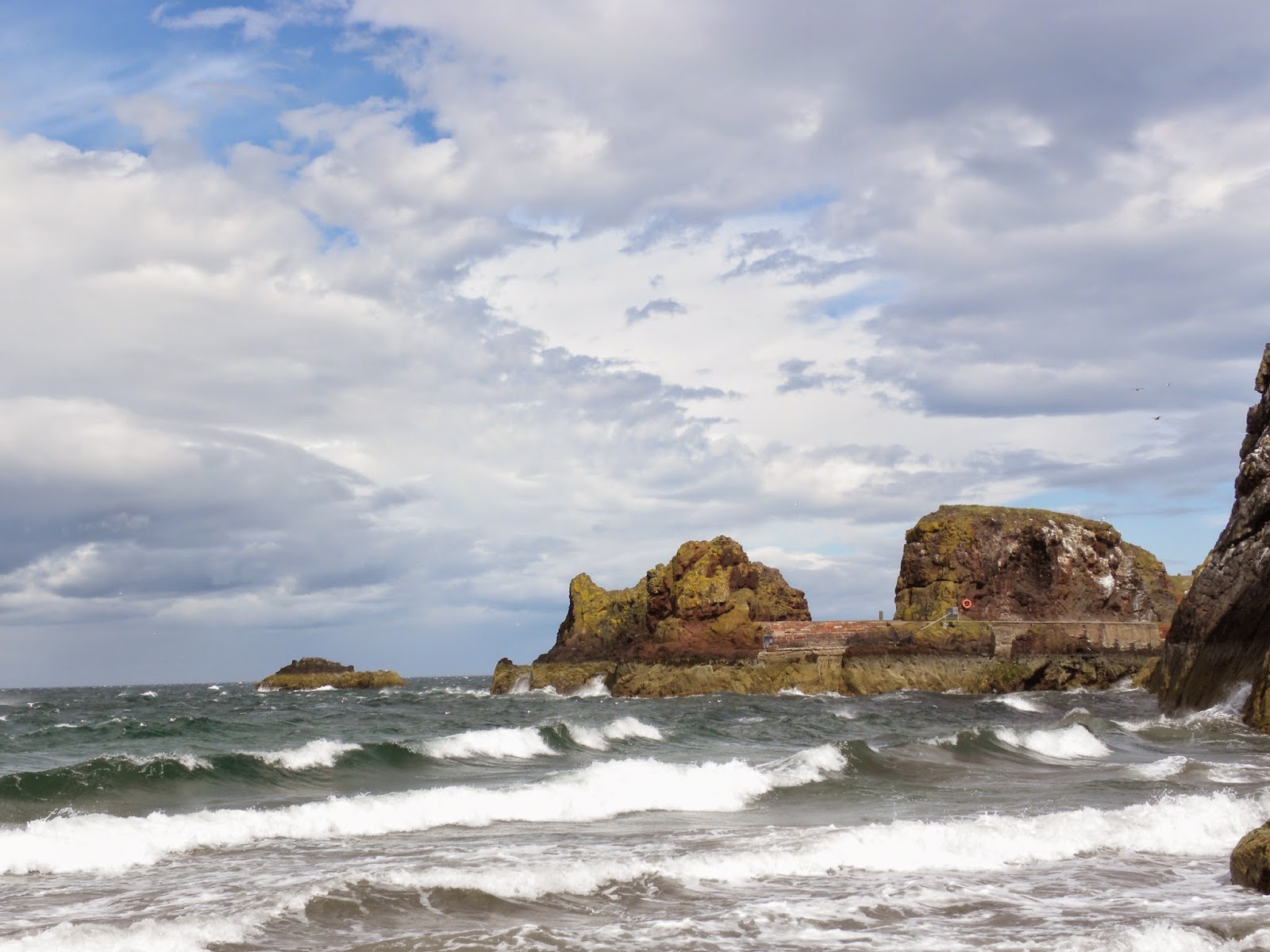 So I was at a bit of a loss. El was expecting her sister to visit and the usual suspects had all headed over to Anstruther on Thursday evening or Friday morning. 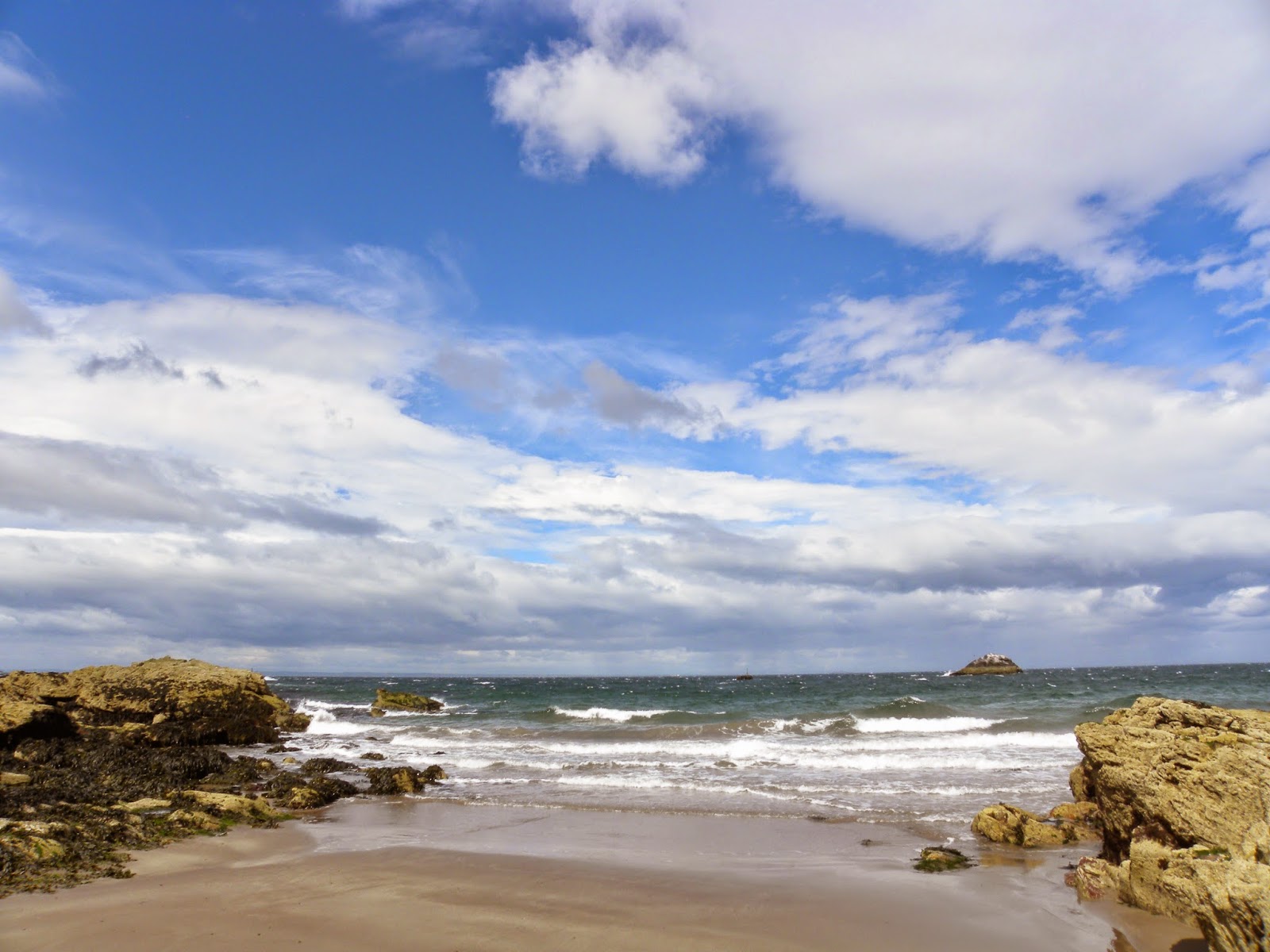 With nothing better to do, I decided to take it easy and have my own weekend away at home.
I took Fly for some good walks along the beach and the cliffs. 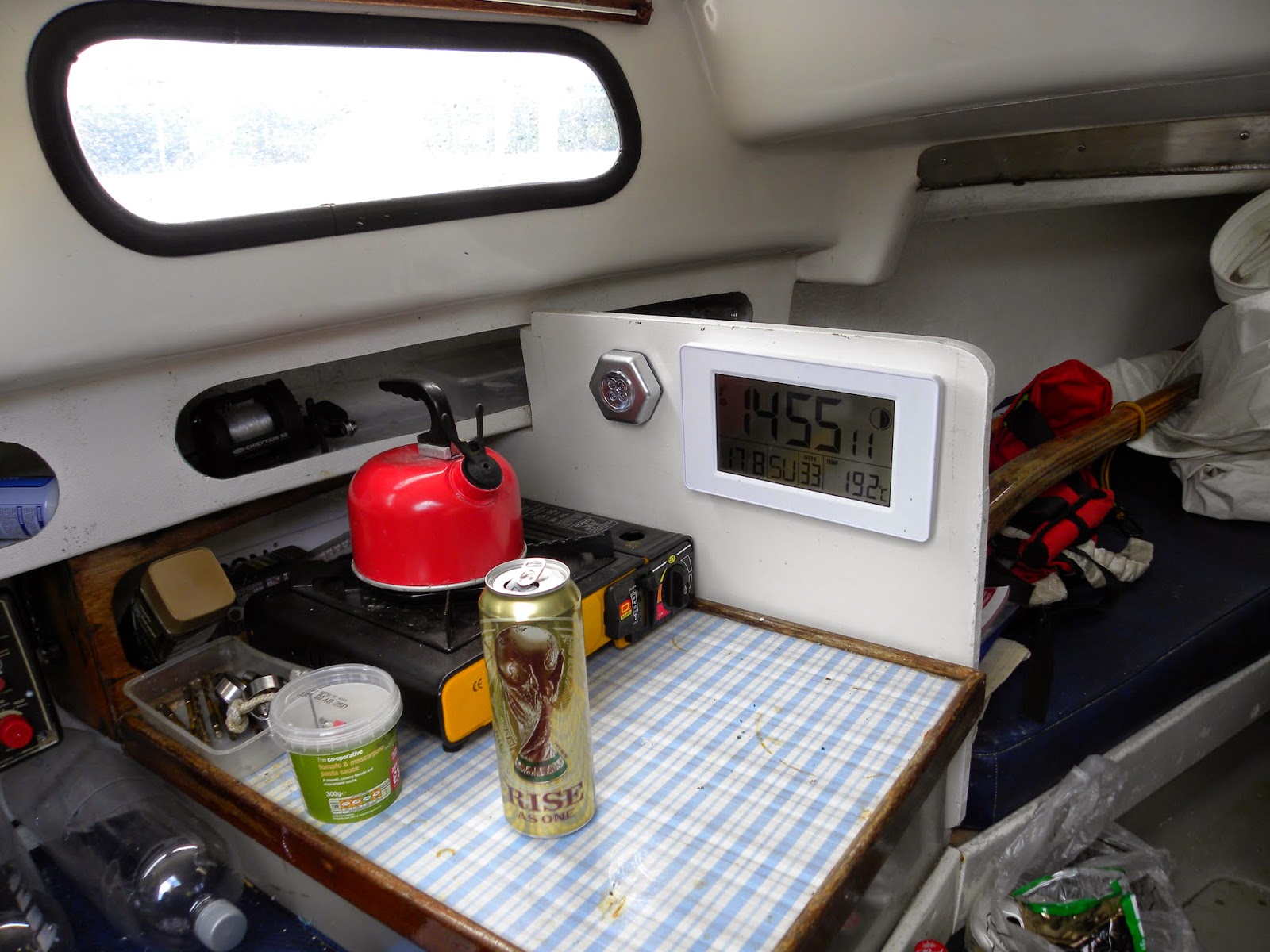 I paddled out to the Heron, put the kettle on, then turned it off and had a beer instead. 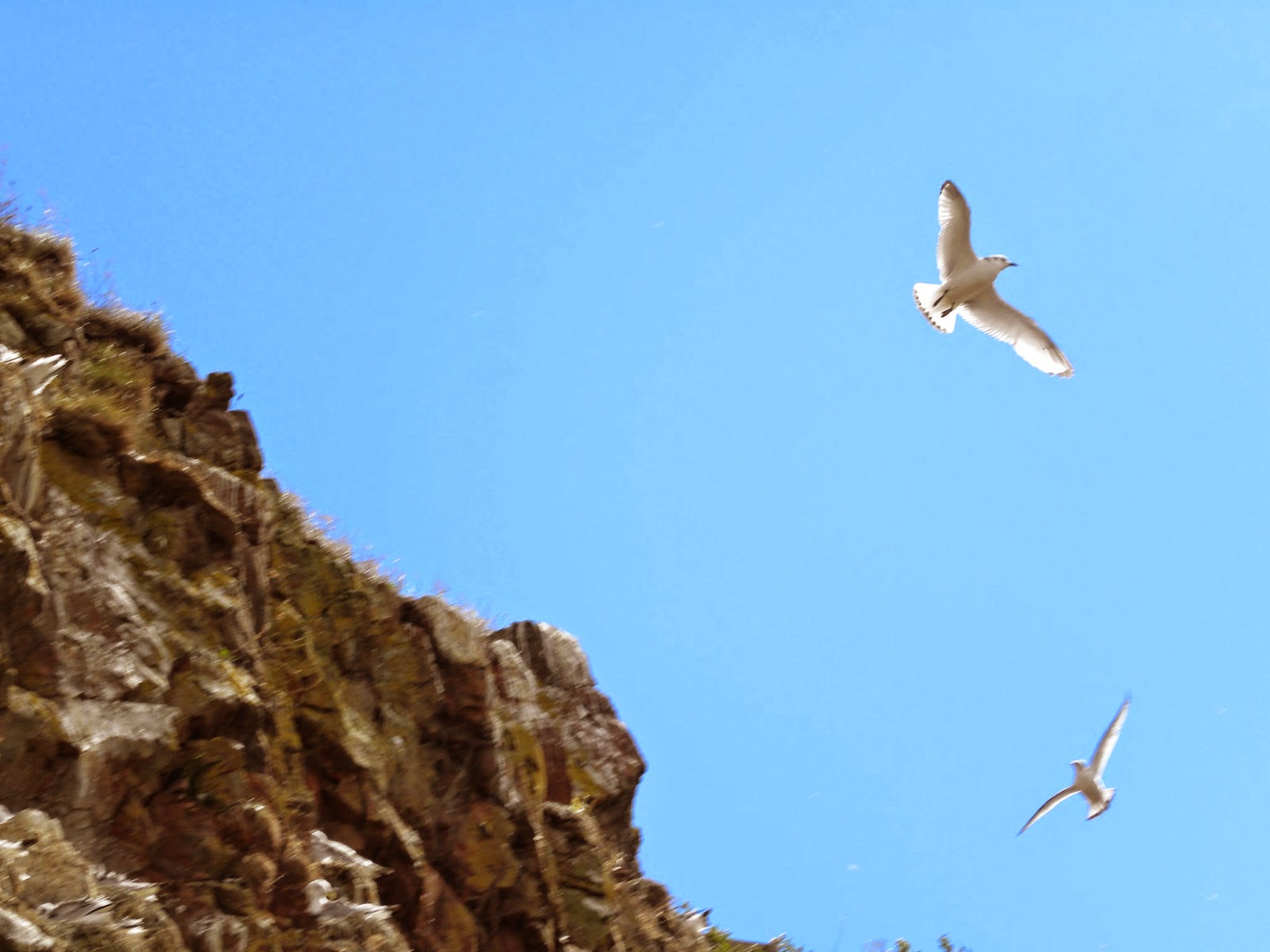 I had a look at the Kittiwakes and realised just how far on summer is. This years young are almost the same size as the parents and it will not be long before they all head back to sea. 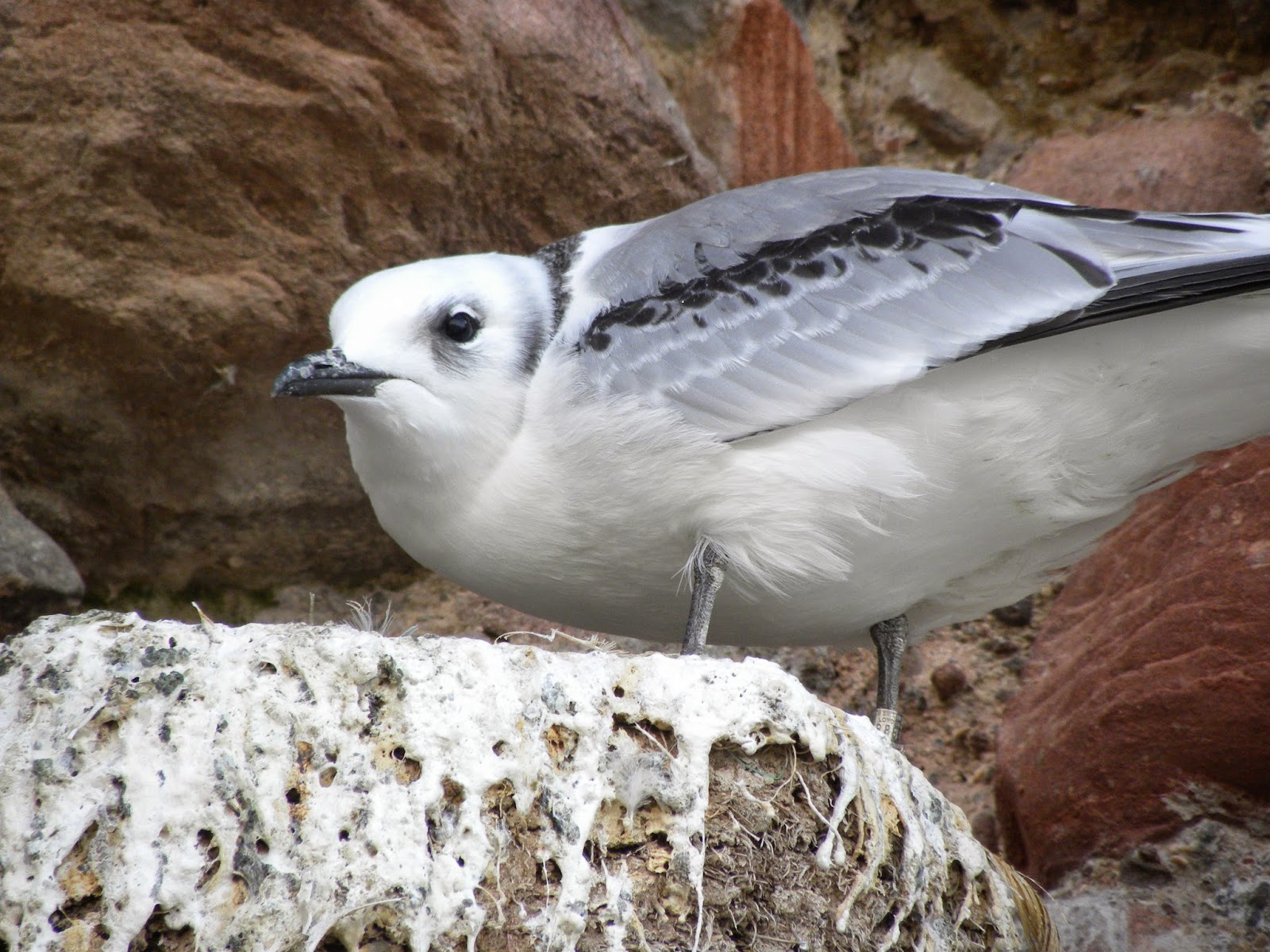 I went rock pooling and did some light rock fishing. 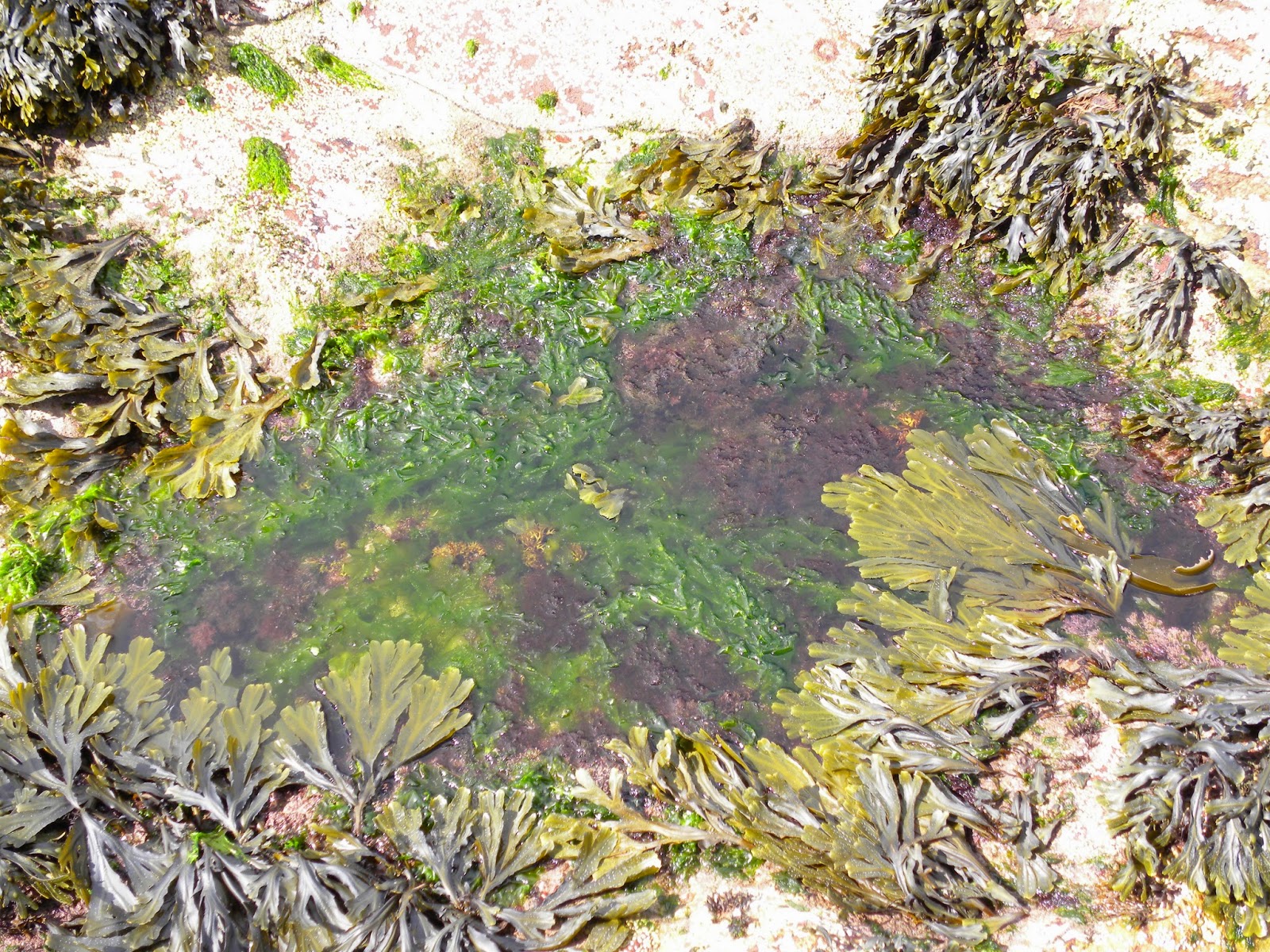 I caught wee Pollock, coal fish and a pugnacious little sea scorpion who kept hold of the isome worm even after I had taken the hook out. He went back eventually, but not without bristling his little spines at me. 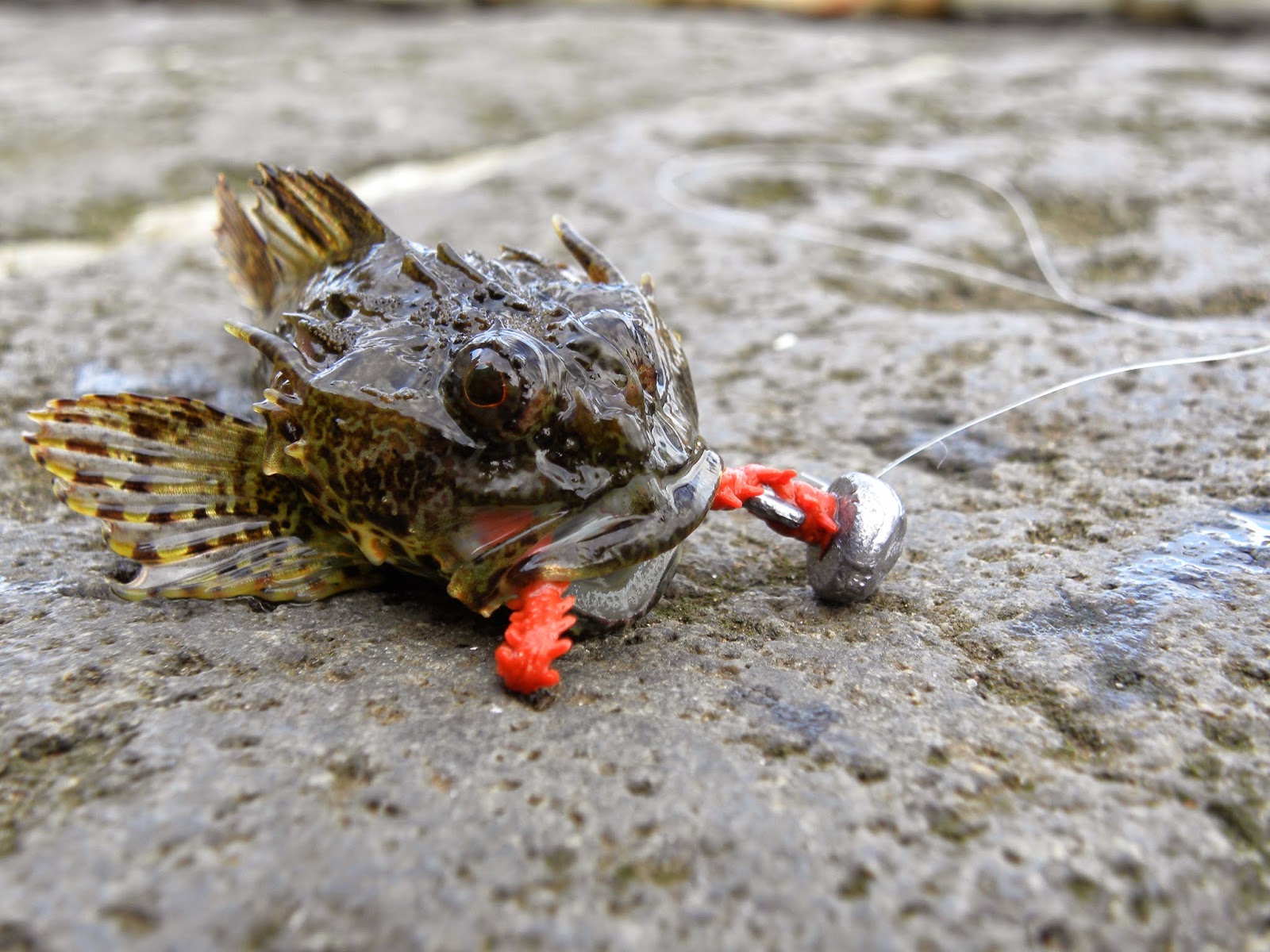 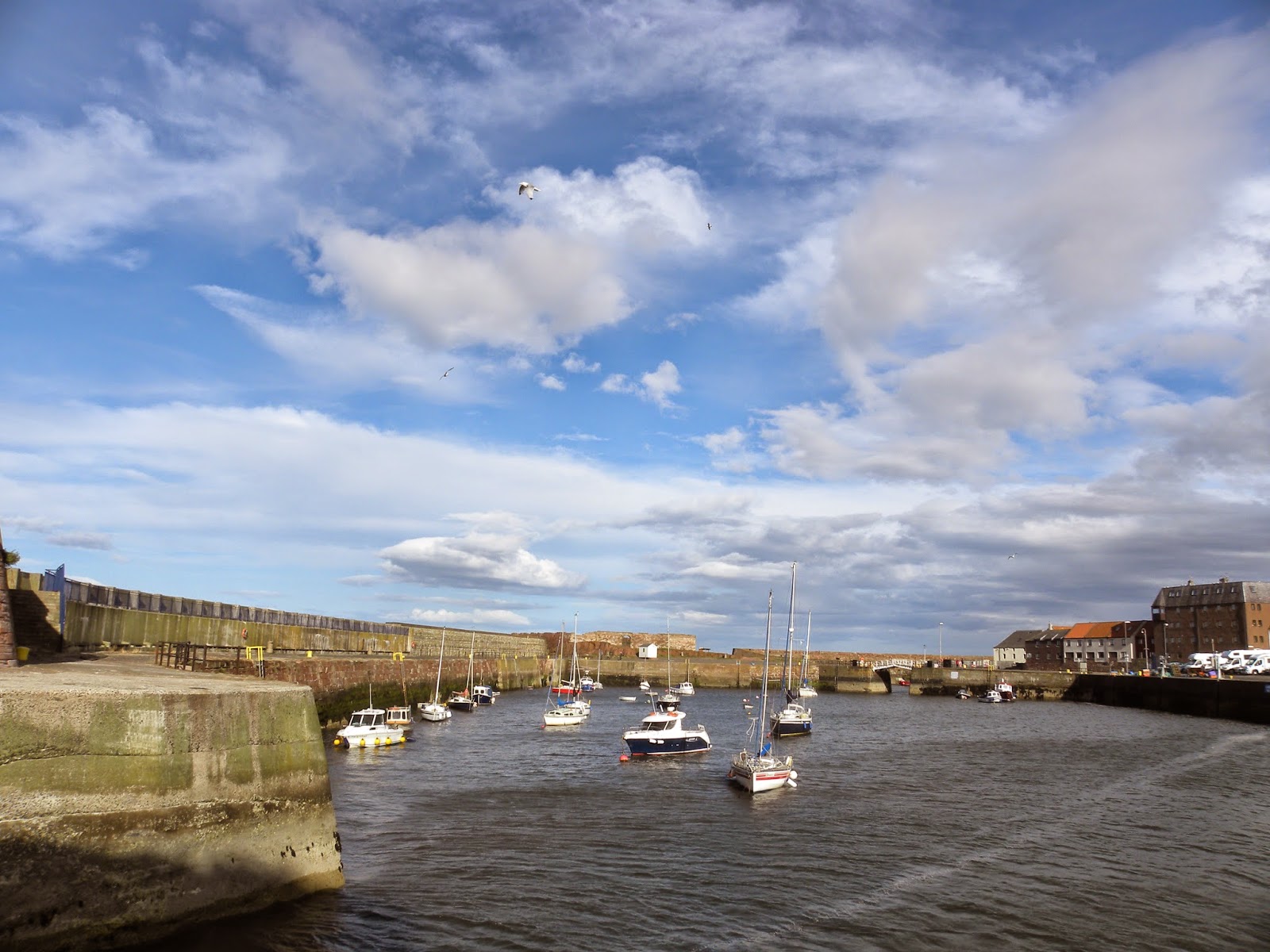 It is the first time in five years I have not sailed to the muster, which is a disappointment, but there will always be next year. The rest arrived back from Anstruther in various cars as the yachts have all been left there until the weather settles. The summer seems to have slipped by this year and there is just the start of a hint of Autumn in the air. I've missed going for decent summer cycles, but every time I do go out, I end up limping the next day. So I'll make a commitment  to get back into regular cycling but just keeping it to short five to ten mile outings. See how it goes.


Saturday was a grim, grey day. The settled high pressure that all of Scotland has been rejoicing in finally broke and a more typical summer returned. Sunday was forecast to be more of the same but instead it brightened up with only the prospect of occasional showers and a gusty wind. 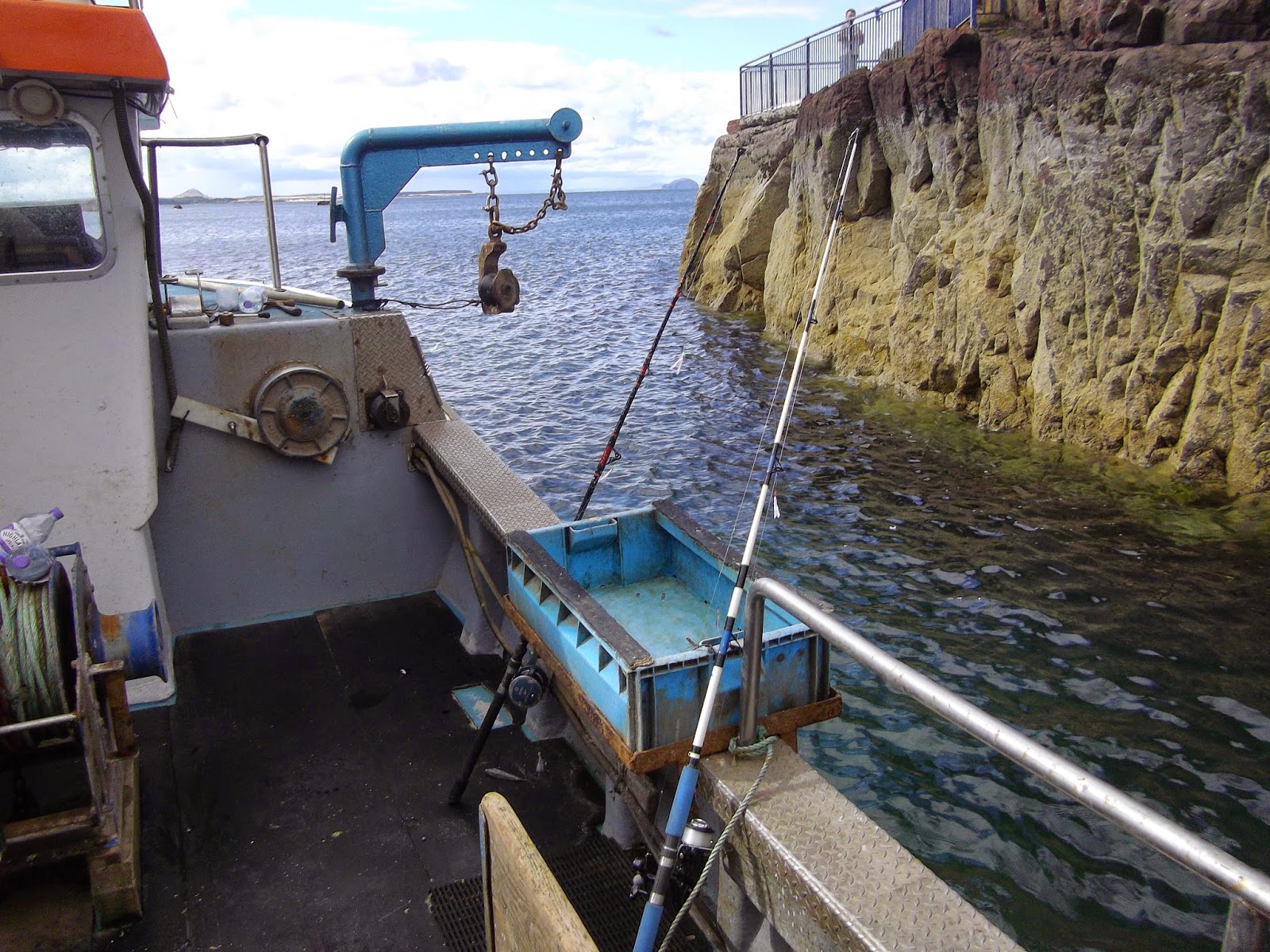 Stuart gave me a call and said that Kev was going out in the afternoon to catch bait for his creels, did I want to come along? I didn't have to be asked twice. I grabbed my boat rod from the Heron and off we went on Kev's boat the 'Sea Breeze'. 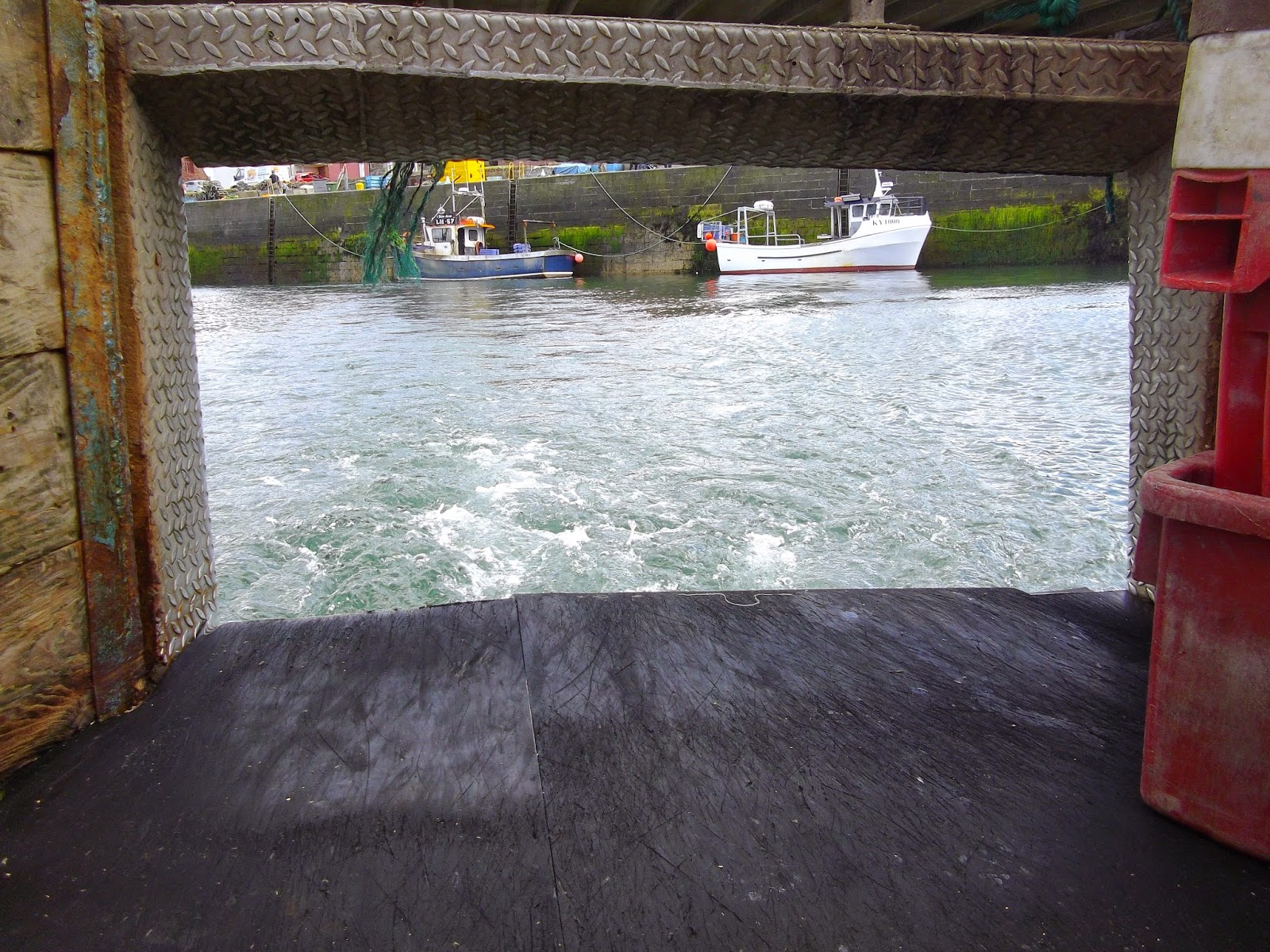 You don't want to slip through there. There's a big brass propeller slicing away just a few feet below. 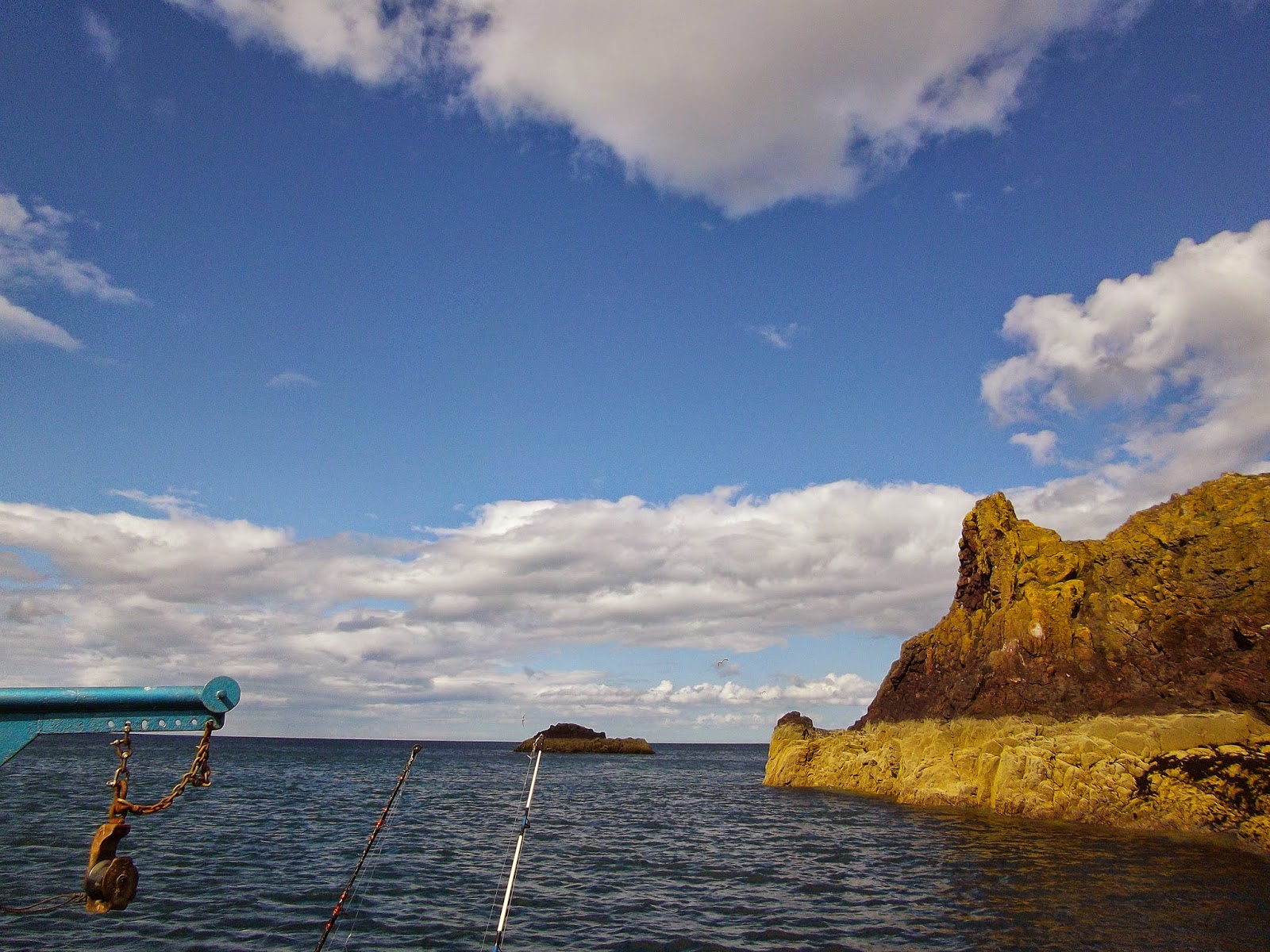 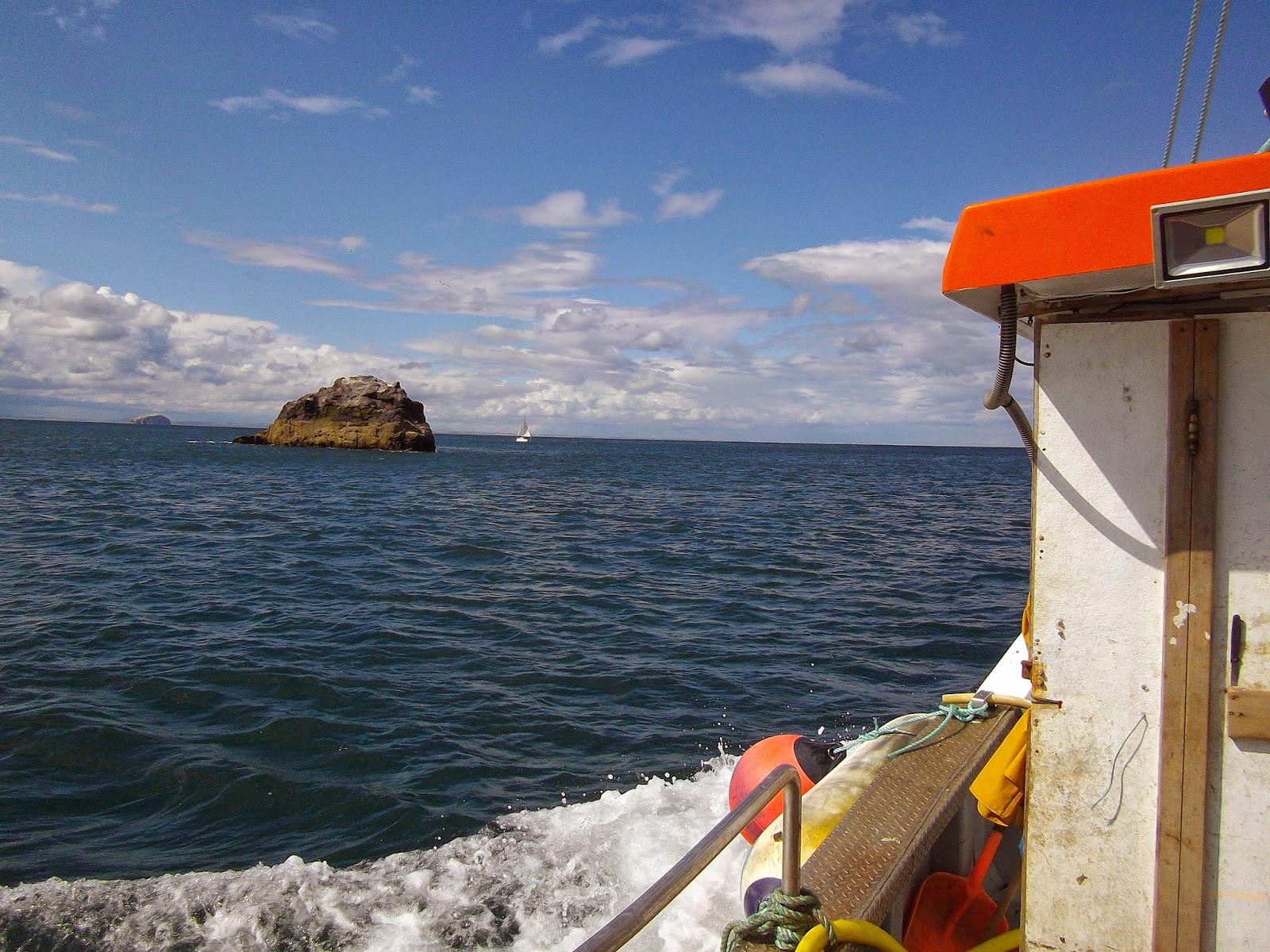 Out from Dunbar and off through the rocks. Phil was out sailing on his Hurley 20 'Hamara Jihaz'.  The big displacement of the fishing boat just pushed the sea aside as the diesel engine hummed away below. Quite a difference from the rolling of the Heron as the little two stroke 5hp screams on the stern. 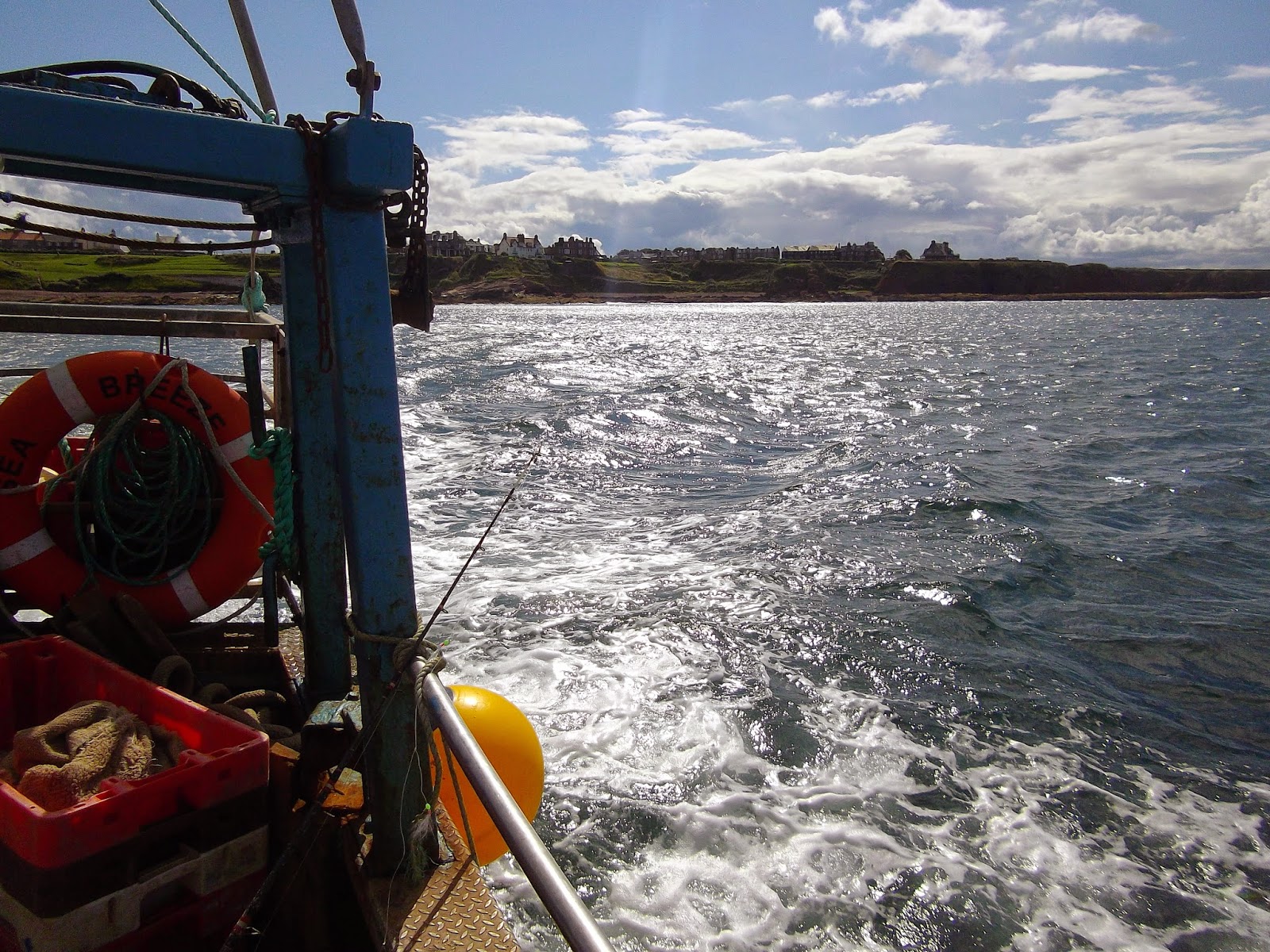 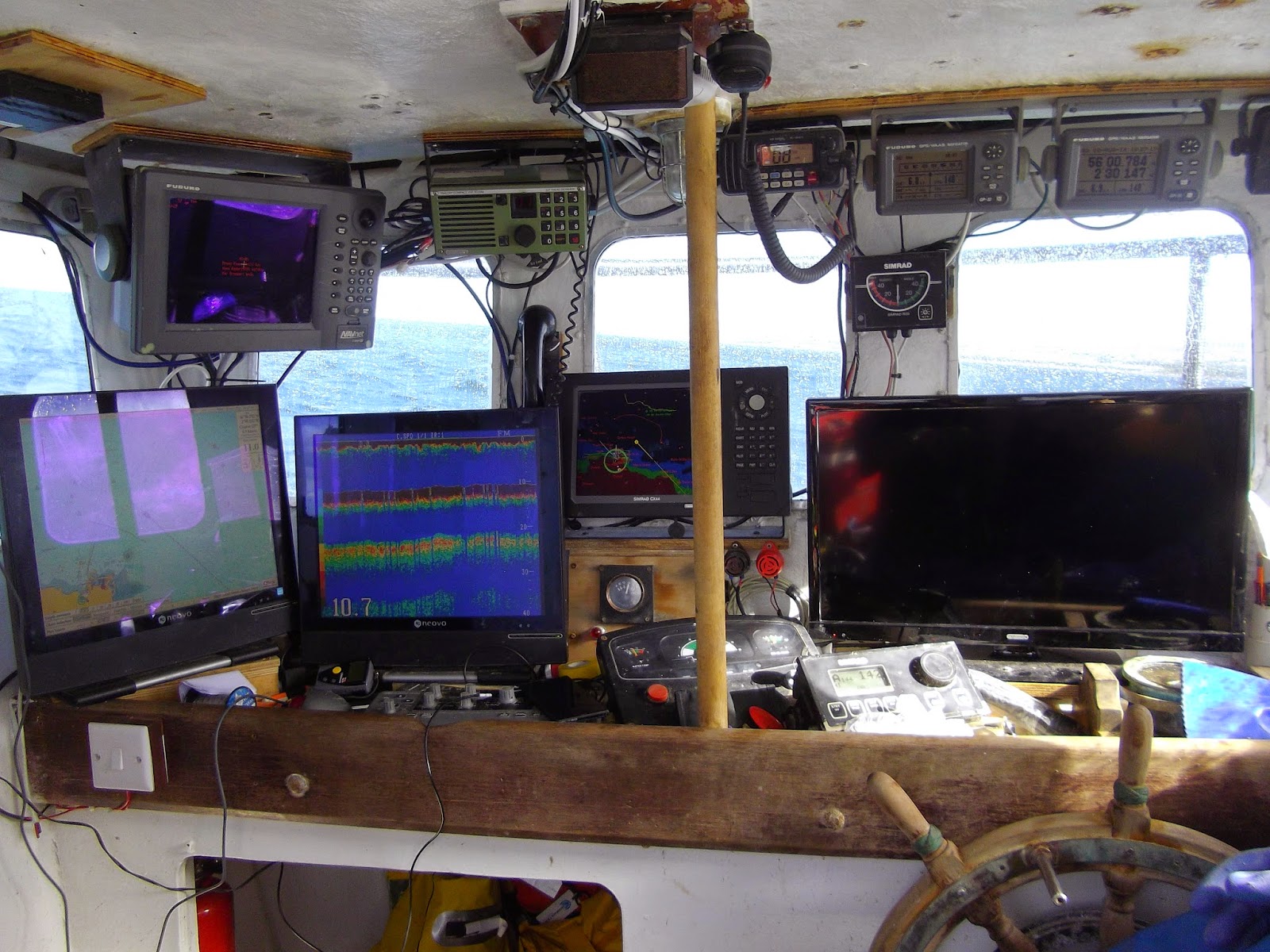 In the wheel house I can understand the plotter, the VHF, the finder, depth and GPS but the rest is a mystery.  Oh, and the gauge for rudder angle, I know that one. And the voltmeter, and I think there is a compass in there and the oil pressure gauge, there's a lifeboat pager and an MOB sender. I think the big black screen on the right is a television. 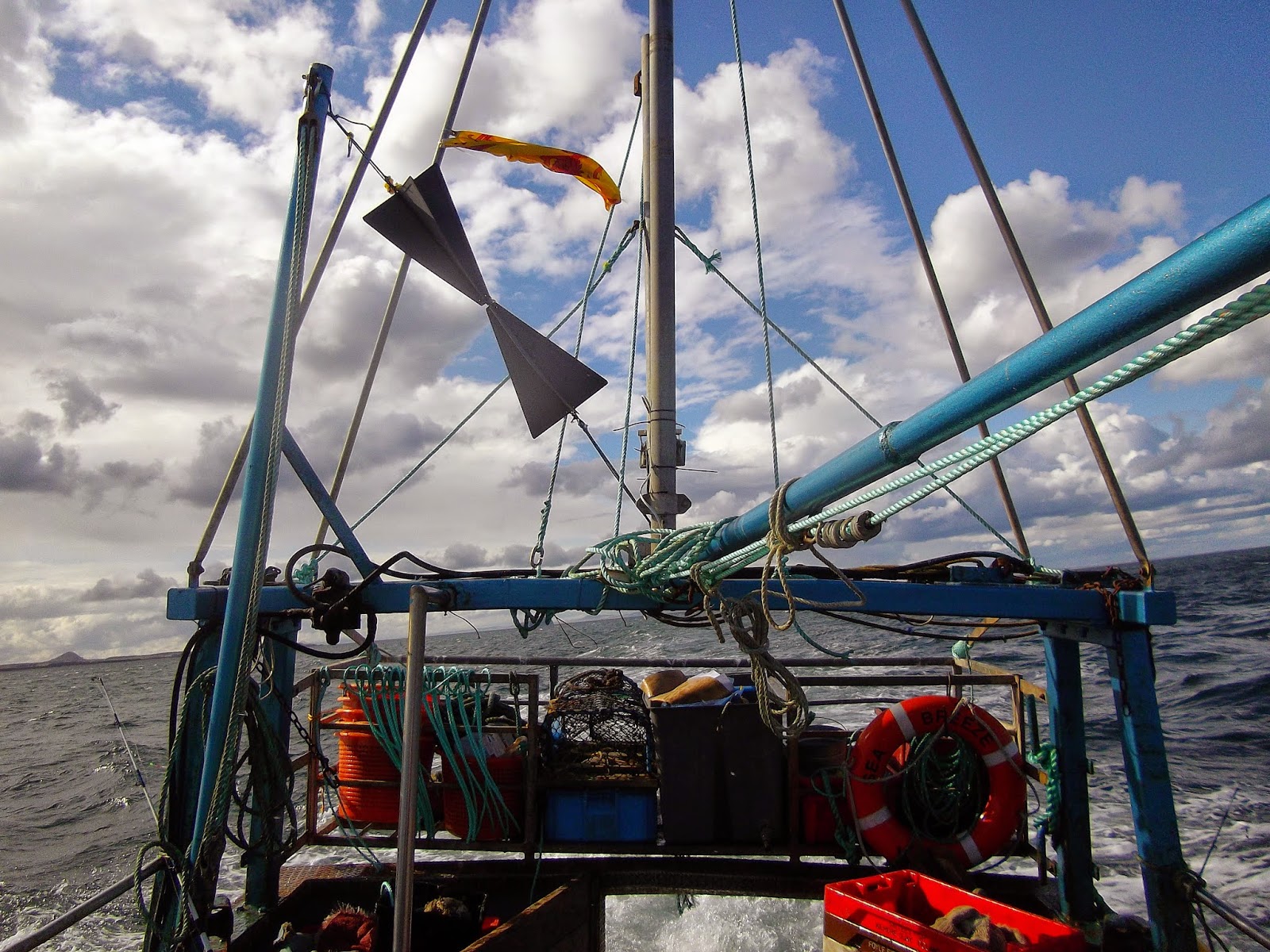 Back outside and now that we were steaming along there was a more noticeable roll but never anything uncomfortable. At the first mark I was drawing a blank whilst Stuart and Kev got a couple of stray mackerel. We headed east and Kev offered me some very useful heavier leads as we were drifting faster than I had expected. I soon got into mackerel, then cod and a few pollock. 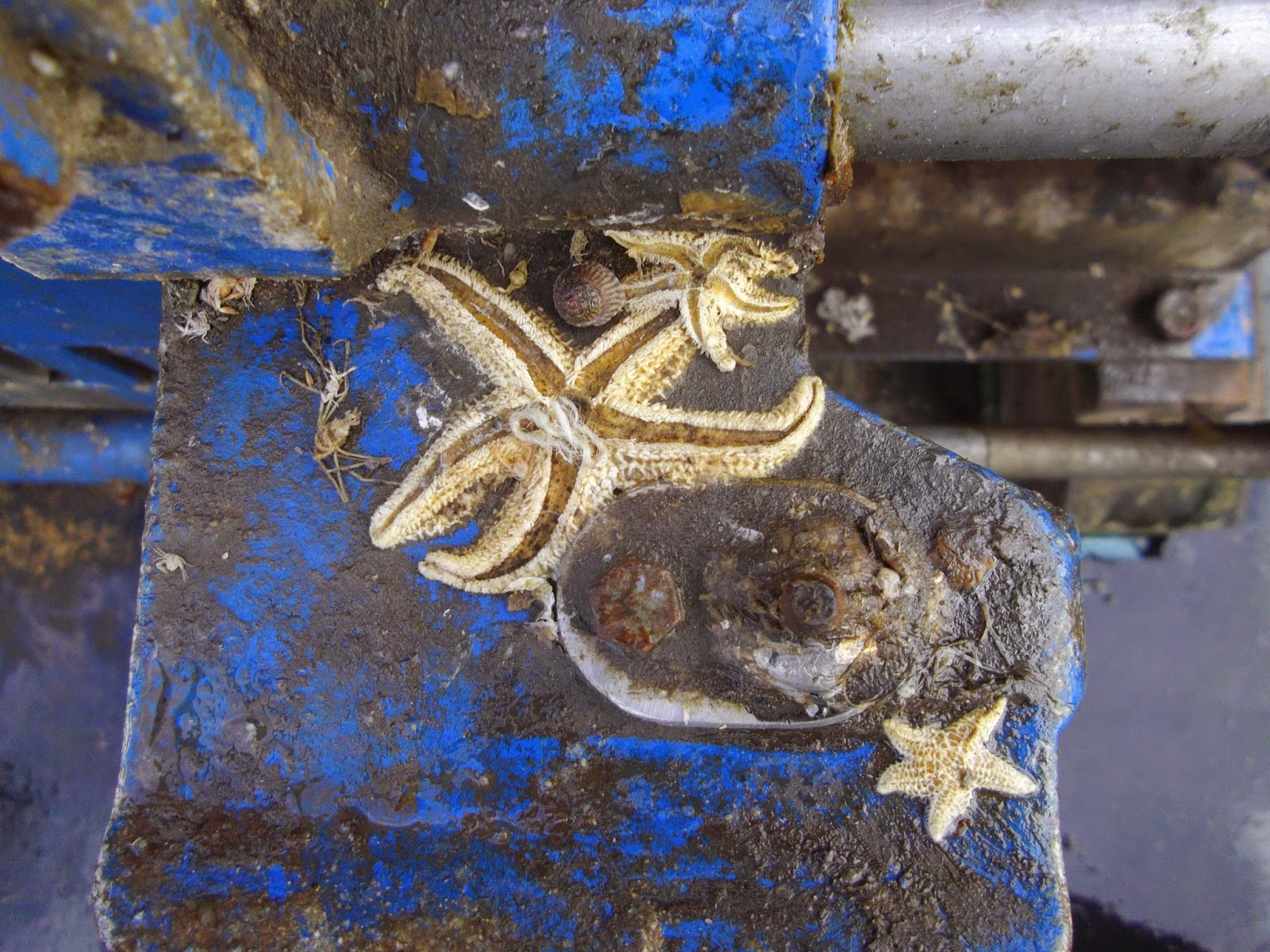 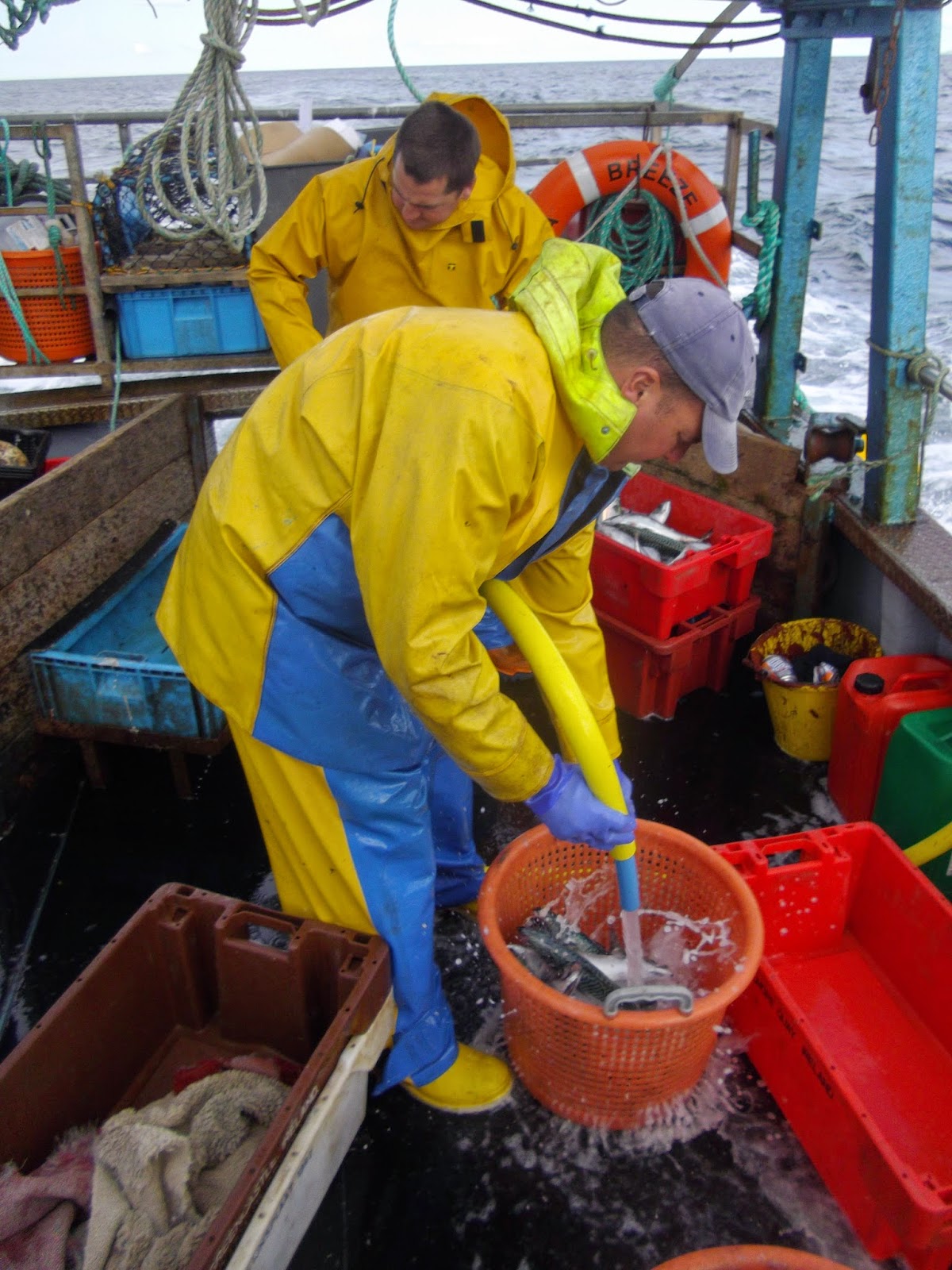 There was a wee squall and the waterproofs went on. A couple of hours flew by and although it wasn't a big catch, there was a box and a quarter as we headed home. 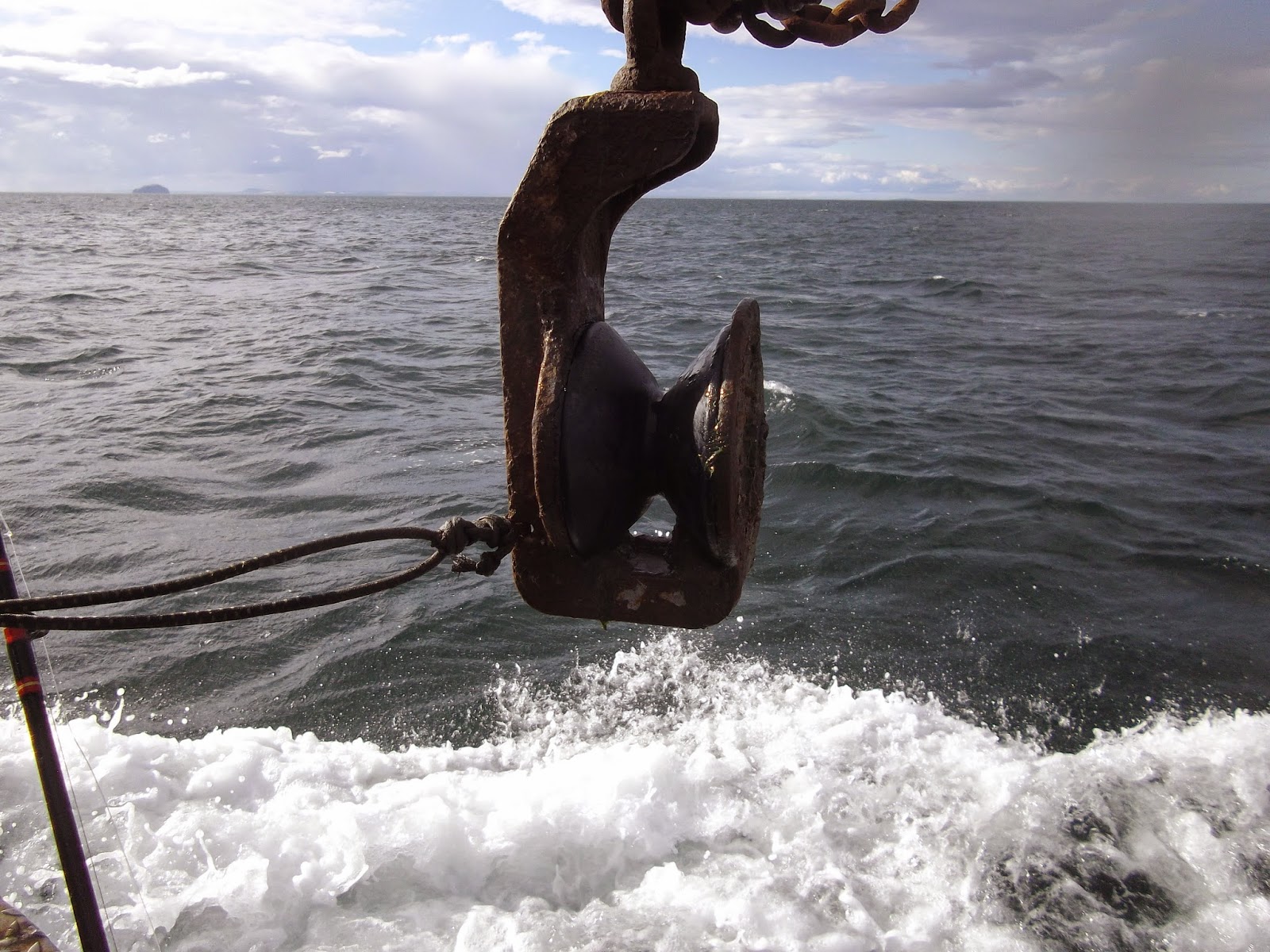 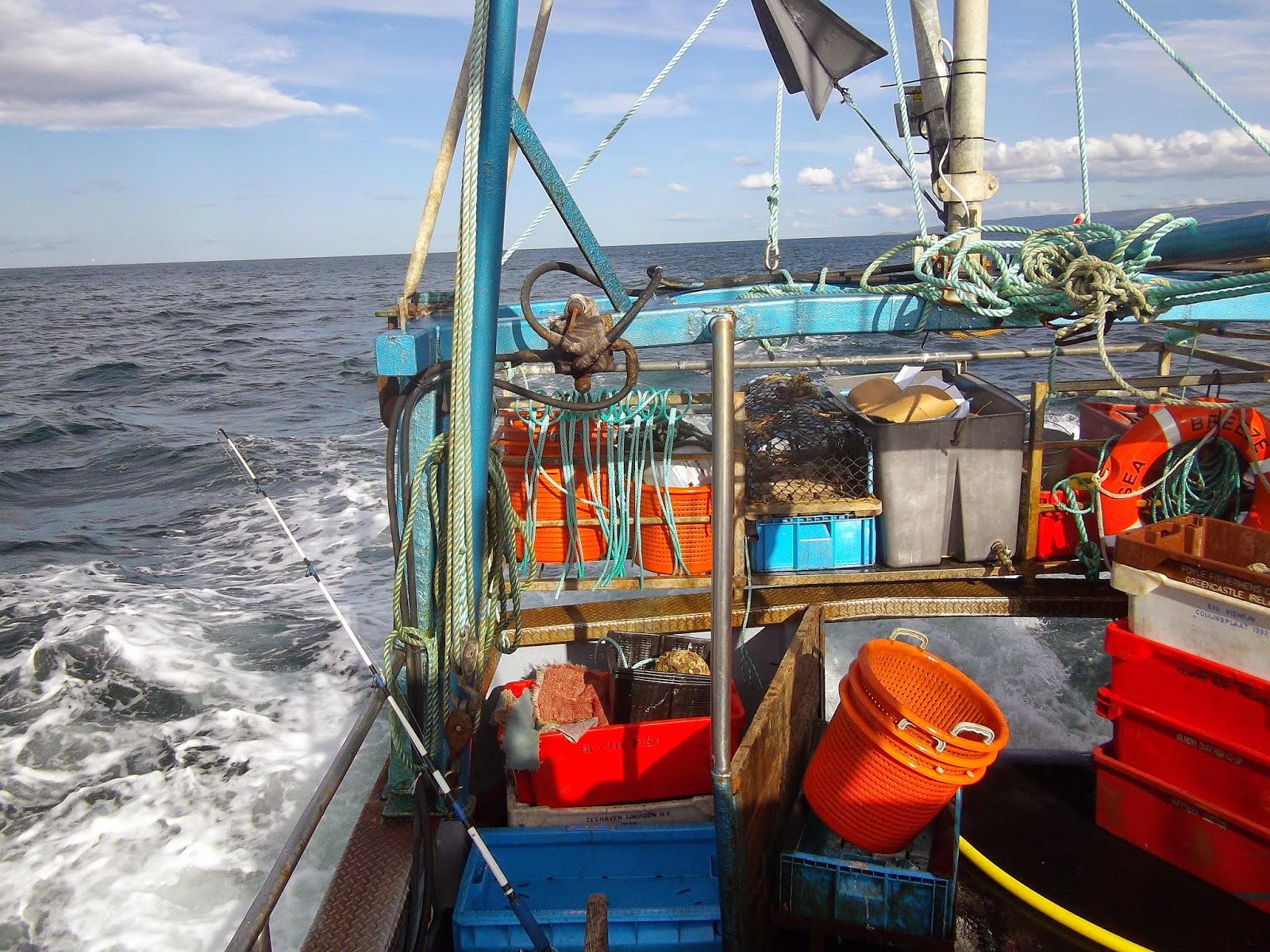 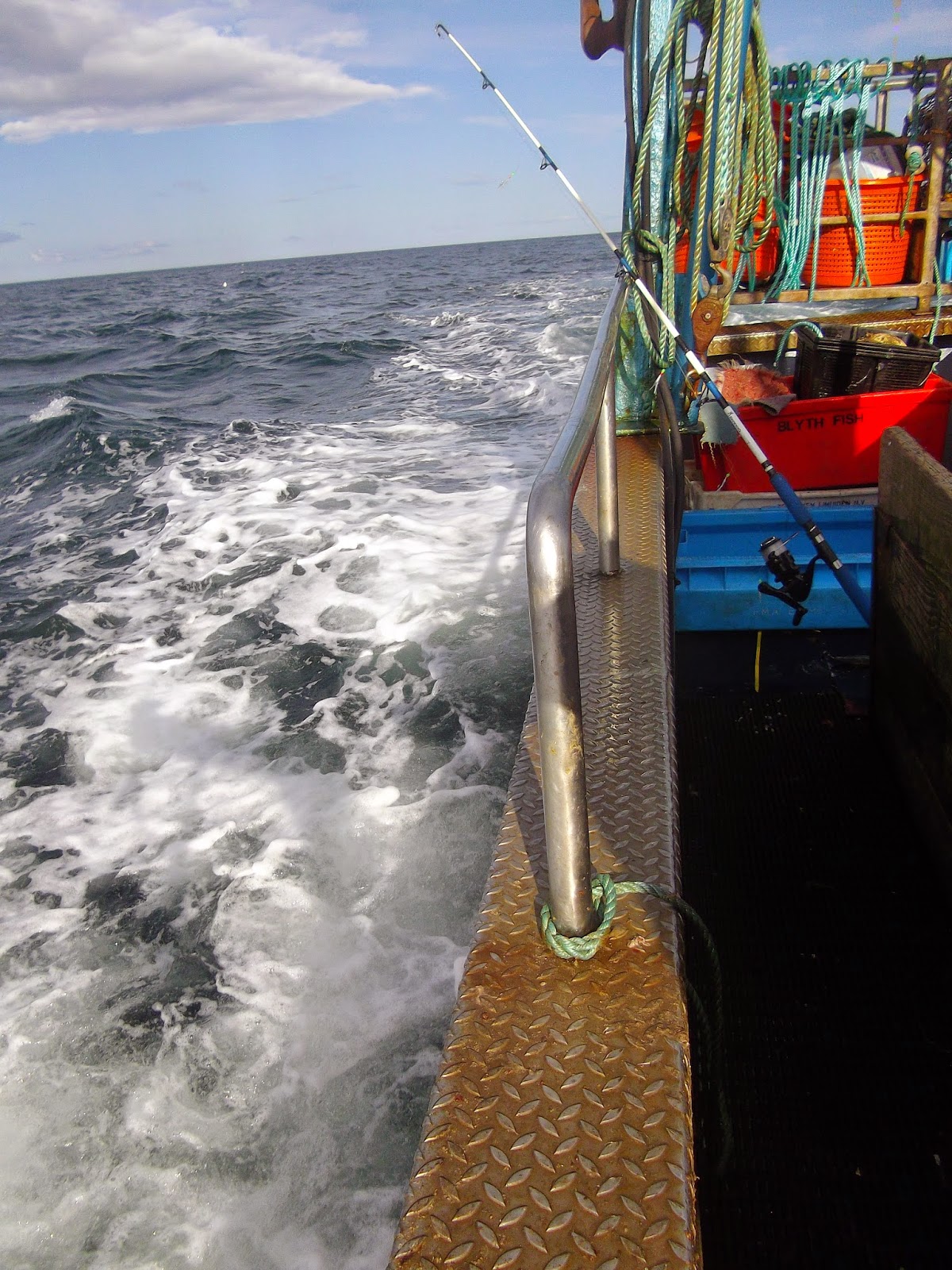 Tied up to land again and a familiar face appeared looking for a free meal. Harry McNeil the harbour seal. 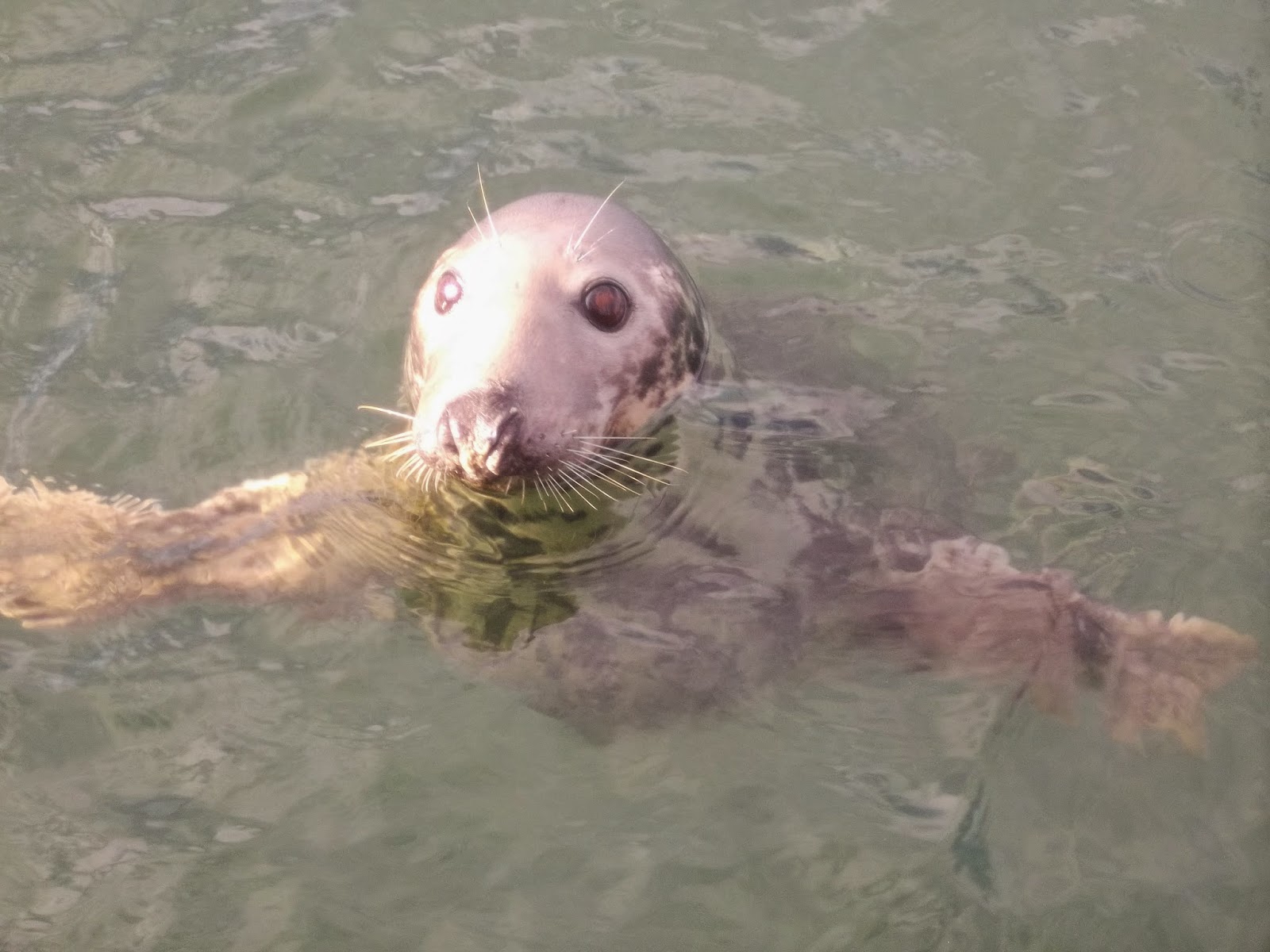 An unexpected fishing trip in good company with some good laughs. Just really enjoyable afternoon out. I'm very fortunate in the friends I have.
Posted by Peter at 21:51 2 comments: